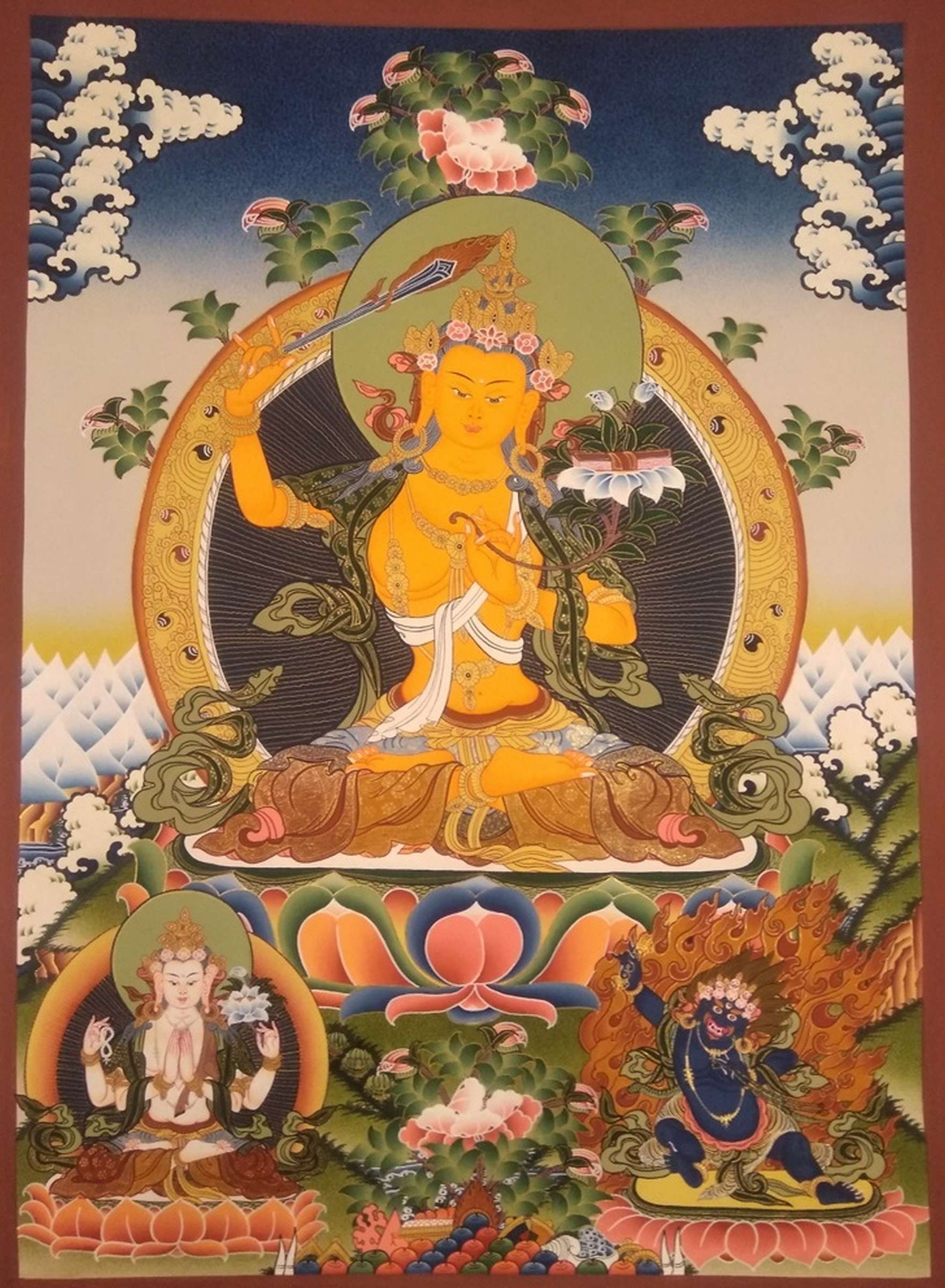 Manjushree with Vajrapani Buddhist thangka is hand-painted on cotton canvas by a Thangka artist from Nepal. Manjushree is embodied as enlightened wisdom.

Manjushree with Vajrapani Buddhist thangka is hand-painted on cotton canvas by a Thangka artist from Nepal. Manjushree is embodied as enlightened wisdom. He confers mastery of the Dharma, wisdom, and eloquence and teaches the path of a bodhisattva in the Mahayana tradition. Manjushree is the Bodhisattva who holds the flaming sword of enlightenment.

Manjushree is presented at the center of the painting. Manjushree is the Bodhisattva who holds the flaming sword of enlightenment, by his left hand in a warning hand gesture in the left hand representing his realization of wisdom to cut through ignorance & wrong view. His right hand depicted in teaching holds the stem of a Blue Lotus flower upon which rests the Book (Pustaka) of Perfection of Transcendental Wisdom.

The mantra of Manjushree is Om A Ra Pa Ca Na Dhih.

Vajrapani is presented at the right down corner of the Manjushree in the thangka. Vajrapaṇi is one of the earliest bodhisattvas of Mahayana Buddhism. He is the protector and guide of the Buddha and rose to symbolize the Buddha’s power.

Vajrapani is pictured dancing wildly within a halo of flames which represents transformation.
He holds a vajra (thunderbolt) in his right hand which emphasizes the power to cut through the darkness of delusion. Vajrapani looks wrathful, but as a representation of the enlightened mind. He is completely free from hatred.

The mantra of Vajrapabi is om vajrapani hum phat.

Chenrezig is presented at the left down corner of the Manjushree in the thangka. Chenrezig Tibetan Art is visualized in many forms with various numbers of faces and arms, and various colors and ornaments. He sits on a lotus and the flat disc of the moon with another moon disk behind him, reflecting his total purity.

Two of his four arms are joined in the prayer position holding the wish-fulfilling gem. In his other left hand, he holds a lotus flower and in his other right hand, there is a crystal mala which he is using to count the repetitions of his mantra.

The Mantra of Chenrezig is Om Mani Padme Hum.

You need to Login first